What is a memory chip?

Memory chips have been used in microcomputer and microcontroller systems for several decades to permanently or temporarily store data or code. At a fundamental level, memory chips can be divided into RAM (Random Access Memory) and ROM (Read-Only Memory). Each memory chip can either be mounted separately on the board or integrated into a microcontroller.

RAM chips provide short-term memory storage whose contents are lost when the supply voltage is switched off. They are therefore primarily used for buffering and temporary data storage. By contrast, the information stored on a ROM chip remains permanently available even after the power supply has been switched off. ROM chips are typically used to store program code containing the control instructions for the microcontrollers and microprocessors responsible for the vast majority of the processes and functions that unfold within the machine or system.

The underlying technology and physics of a memory chip can vary. The technology determines the programmability and erasability of the memory chip, as well as the expected lifetime of the stored data. The loss of any individual item of data can lead to the failure of the entire PCB.

The contents of a ROM chip are fixed during production and cannot be edited. This type of memory chip is typically only economically viable in devices with very high production numbers, e.g. consumer goods. By contrast, so-called PROM (Programmable Read-Only Memory) chips can be programmed once directly by end users with the proper equipment by “burning” certain connections onto a matrix of memory cells to switch their binary state from “0” to “1”. The memory lifetime of ROMs and PROMs is essentially unlimited, since the memory information is physically fixed and wired onto the chip. 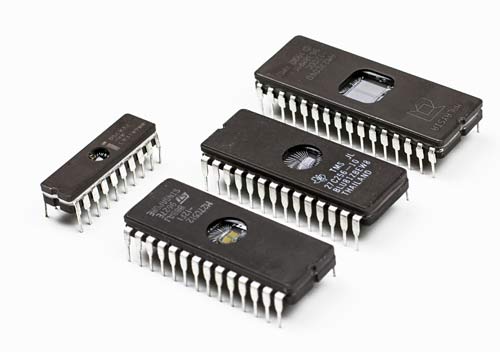 Since ROMs and PROMs are very inflexible and expensive to introduce into the product development process, so-called EPROMs (Erasable PROMs) were later developed as an alternative form of memory technology. Unlike ROMs or PROMs, the contents of an EPROM can be deleted. A characteristic quartz glass window is built into the chip, allowing the contents of the memory cells to be erased with UV light. Each memory cell in an EPROM takes the form of a MOSFET transistor with an insulated auxiliary electrode (floating gate) control connection. The uncharged state of the floating gate represents a binary value of “1”. If the floating gate is charged by applying a high programming voltage that triggers a series of specific physical phenomena, the transistor is permanently switched into a binary state of “0”.

The electrical insulation causes the control voltages on the floating gates to be retained even when the programming and supply voltages are turned off. Since the required programming voltage is significantly higher than the standard supply voltage, EPROMs can only be programmed using specialized equipment after removing them from the PCB.

Over the years, the cost of EPROM technology has decreased rapidly. Ever since the 1980s, they have established themselves as a standard component, replacing the majority of ROMs and PROMs. They are now used in virtually every microcontroller and/or microprocessor circuit. The manufacturer data sheets usually only specify an expected lifetime of around 10 years for the data stored on an EPROM.

Since EPROMs can only be programmed and deleted if they are unmounted from the PCB, an alternative memory chip technology called EEPROM (Electrically Erasable PROM) was developed. EEPROMs can be programmed and erased directly within the application circuit at the standard supply voltage. The advantage over a RAM module is that their contents are retained even after the supply voltage is switched off. EEPROMs also contain MOSFET transistors, except that the required programming voltage is not applied externally, but instead generated internally within the chip. Their disadvantages compared to EPROMs and RAMs include relatively long erasure and programming times, as well as clear limitations on the maximum possible number of programming cycles. 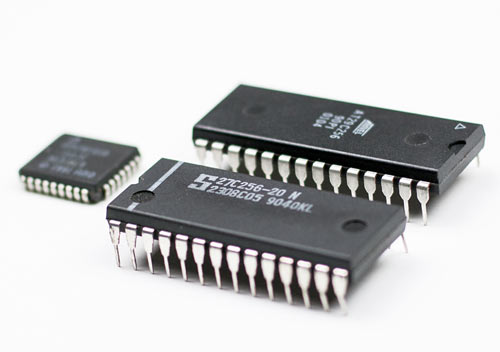 Flash EEPROMs were developed to overcome the slow erasure and programming times of regular EEPROM chips. However, unlike EEPROMs and EPROMs, flash EEPROMs no longer allow bytes to be specified individually; multiple bytes must be programmed simultaneously in larger byte arrays. On the other hand, flash EEPROMs are significantly faster at erasing and programming new data, and they achieve a longer service life. The underlying technology of these memory cells is also based on MOSFET transistors, meaning that they eventually also suffer from data loss caused by aging and frequent write operations.